Recently I came across a post on the ltscotland glow blog about a transition Glow group success. It was set up to give the primary 7 pupils the opportunity to liaise with the senior pupils at their local High School. I wonder if this is the same Glow group success that was shared at a MIICE conference I attended last session? At that conference, I heard about  Transition projects happening within Glow. As well as the one described here, there were others that linked Primary 7 and S1 pupils via a variety of curricular areas:

Our local Authority has just recently signed up for GLOW, so it’s too early to be thinking about using it as a vehicle to support the changeover from primary to secondary.

I have, however, been pondering the use of online spaces to aid the transition process in some curricular areas:

Evelyn is going to showcase the children’s artwork on the blog, and we’re hoping that the primary 6 children will use the class blog and perhaps their online wiki spaces to discuss their artwork. The children in this particular class used these spaces last session with Cassie, their probationer teacher. The aim is to get feedback from High School in the form of comments. 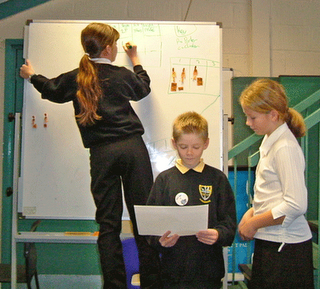 I intend to re-invent the Carronshore Maths blog  that I set up a while ago and the associated wikis. The Carronshore maths blog isn’t an edublogs supporter blog, though, so I’ll be moving it to primaryblogger to get rid of any adverts ….. and to get access to akismet spam blocker …. and get lots more space, too 🙂

The first half of my 23 month secondment as an ICT Support officer is now over – and it went by in a flash! I think I spent most of it ‘finding my feet’. The courses I provided were a mixture of ones that were either:

Like last session, I plan to prepare CPD activities (just one of a number of remits) by introducing teachers to the available online tools I learn about via twitter. Courses on using tools such as Xtranormal or GoAnimate  were  well received last session – and I would not have known of their existence if it hadn’t been for the sharing culture I’ve become accustomed to by following my fellow ‘twitterers’.  More and more useful free online tools are becoming available at such a fast pace that it’s hard to keep up. Next session, I have some new ideas planned – but this post will concentrate on just one :

The best find I’ve discovered for next session is a new blog host to recommend to teachers here. I came across it via an email a colleague at work received. When I took up this secondment post, I had been using edublogs for a couple of years. There were little annoying things like the slowness, and the occasional unexpected ‘down-times’ .. but it was free and it was under the umbrella of  ‘education’ so it served my purpose. I’d also used eduBuzz to host a blog that I wanted to set up to compliment our photaday project adventure – and this led me to have the confidence to set up pupil individual blogs thanks to David Gilmour’s expertise 🙂

The following year, I managed to successfully set up individual pupil blogs via edublogs. At the time, they recommended using learnerblogs for pupils. The blogs were set up in such a way that I had equal administrative rights on each pupil blog, and comments needed to be moderated before appearing on a blog. This set-up worked well for a while. During the course of the year, however, learnerblogs were no longer supported by edublogs and advertisements began appearing on the pupils’ blogs. Annoying spam comments also began to surface on a few of the blogs.

One weekend, however, I noticed a disturbing comment on the class blog. It was from one of the primary 7 pupils. Monica wrote:

Hey i really enjoyed Crucial Crew it was great fun. Please would you visit my blog as someone has left a comment i dissaprove of. I dont knoe who it is. It is quite rude.
Bye x

When I investigated her blog, I was horrified to find that the comment was extremely offensive … so much so, that I immediately deleted her blog  – a decision made in haste. I spent the rest of the weekend setting up edublog accounts for the children and, on the Monday, I demonstrated to the class how to export all the information from their learnerblog accounts and import it in to their new edublogs one. I also explained how to activate the Akismet plugin and gave them a necessary API Key to enable it to work.

All went well after that, and I successfully completed a case study on my experience of giving the children in my class their own online space – and when I started my secondment post, I had no problem recommending using edublogs as a free blogging platform for other teachers in the Local Authority. The recommendation was short lived, however, when inapproriate adverts began appearing on the edublogs class blogs. The only solution was to sign up to be an edublogs supporter. It doesn’t cost a lot, really, to make a blog ad-free, and you can add 30 more blogs (a class set?) to that account so that they’re ad-free, too.

But there’s a catch ….. being ad-free is all they’re entitled to. There’s no option on these blogs to add any plugins – so Monica’s ‘extremely offensive’ spam comment could be repeated again and again … much more disturbing than just an annoying advert!!

And then it happened .. PrimaryBlogger to the rescue!!

Cassie and primary 5L/W did a fantastic job of keeping it going last session. Next session, Evelyn W – our school art specialist (and my Chartered Teacher buddy), will use it to allow the Carronshore pupils to display and discuss their artwork.

I’ve also (very quickly and easily) set up some ‘training blogs’ that can be used during twighlight sessions. These are shown in the screenshot below. Everyone will sign in to the main falkirkcpd blog, then scroll to their allocated blog on the dashboard. I’ve set 10 up, with the idea that participants can work through activities in pairs.

I’m off now to work on ideas for giving children space on a wiki so that they can build up their own ePortfolio. Thanks to Jaye for introducing me to the concept …. via twitter of course 🙂